Looking at Russia with a Magnifying Glass


You can listen to this article as well )

After completing a month in Russia on 15.08.2016, on Road, in Trains, Hostels, Co Working Centers, Villages, Lakes, People's homes and in their hearts, I am now qualified to share some insights about this amazing, vast and charming Country.

Russia is the largest country in the World in terms of Area and has 11 time zones geographically and 9 in practice. Vladivostok the Eastern most Major city is at a time difference of 7 hours from Moscow, the western most Major city. So you can guess the enormity. It takes 6 days in the fast train to go from the east to the west and even more to go everywhere and that's a lot. You cross all sorts of terrains on your way except Deserts and High Mountains. That you do if you cross over to China or Mongolia or Kazakhstan somewhere on the way, which is absolutely possible and common for foreign tourists to do.

A little bit about the Russian Railways. As in India, the best way to see Russia is through a train journey. You meet people from different parts of Russia on the way and understand that this is a federation inhabited by people from many different ethnic backgrounds and not just the Fair Blue Eyed Russians who are more Finno-Ugric or Nordic in their origins than Slavs. You have the Buryatski people, close relatives of the Mongols, you have a number of Korean tribes as well. People are very hospitable and will force feed you Meat, Fish, Tea and Beer and Vodka if you are a man in a jolly mood. :D . They will talk about everything from politics to economics, marriage and family, travel and religion and every other thing under the sun. You just have to know the Language, Russian :P otherwise you would be staring at them and they at you. It is a difference of Earth and Heaven. In short, People are ultra hospitable.

It is very easy and straight forward to book train tickets online and through train stations for e.g. http://pass.rzd.ru is as website and also http://tutu.ru . You can chose the British Flag on the top to show the site in English. Easy. There are people to help everywhere on the stations and are very prompt and friendly. 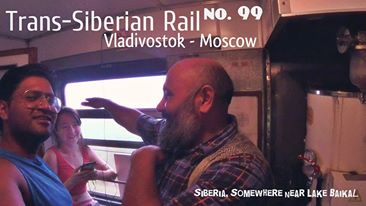 A bit about the Russian Men and Women, because' its a very interesting topic for all the stereotypes that you have. There are two kinds of Russian men and women, born before Perestroika and born after (90s). The ones born after are a bit out of tune with the Russian-ness and look more towards other countries for their cultural identity, some look west and some east. This is a very general statement though and not meant as an offence to anyone as there are all kinds of exceptions as well. The ones born before and now are in their 50s are super interesting people. They lived their youth in the Soviet Union and now can compare the Democratic Capitalistic System. It is very interesting to talk with them as they explain how the Country has changed, how they lived earlier and now, they are super open and want to know more about the world as they could not in their youth.

The middle aged Russian men are still affected by the Russian movies and atmosphere of the 90s with their super short cut hair and the Gangster/Mafia look. Which is just a facade as they hurry for work every morning and afraid they might lose their job just like other people everywhere else. Younger men are trying everything they see on television, magazine and internet. A super simple hair cut costs 600 Roubles (in India it would cost 30 Roubles/Rupees). They even have jokes about the super expensive salons here.

Russian women on the other hand are super confident about their position in society and demand a lot from men in terms of their behavior and conduct. They always dress perfectly and carry themselves with an air of self sufficiency. There are very set ground rules for interaction between men and women who are strangers but interested in each other and of course conversations are mostly in Russian. To your surprise, Russia is a lot more conservative compared to what you might think. The dresses can be quite modern sometimes but the conduct is always reserved... remember that. Almost all businesses on ground are managed by Women even though they can be owned by men. Women run Russia... if that's what you wanna know. Men just do the heavy work. Armed forces, Driving, Carrying stuff and so on.