You can listen to this article as well )

I forgot all about Janmashtmi till a Tatar Russian friend of mine invited me to the celebrations in ISKON, Yudino, Tatarstan, Russia.

Yesterday was an amazing night of revelations and understanding in this multi ethnic city of Kazan in Russia. I was invited to the Sri Krisna Janmashtmi celebrations in a small town of Russia. I was amazed to see the love for Indian Culture and Traditions in this distant part of the world. How dearly they hold India in their hearts.

I was grateful for this invitation and honored, because as they say in India, that you can arrive at a Holy place only if some greater force wills it. It was also a night of great insights as I saw and experienced some things that made me realize that the Third World War is being fought right now all around the inside our heads through Information Technology and Russia once again is paying a heavy price.

A young Russian ISKON priest of 24 years invited me for a conversation starting with gentle introductions and then after about 30 minutes he was literally lecturing me about Hinduism and how Indians have destroyed it. I listened for a long time as it was very interesting for me, and then turned the knob a little bit and confronted him and then he showed his true spiritual awareness by abusing me, literally. In short, he was just another fundamentalist trying to sell Bhagwad Gita to a Hindu by trying to prove to him that he understands it better. 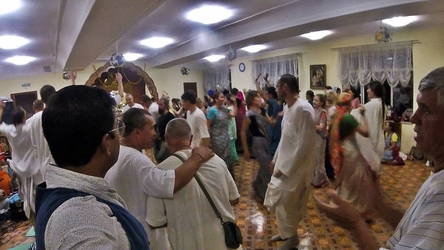 This made me realize how insecure western people are about faith, spirituality and other profound matters. They need Indian holy scriptures to justify their existence time and time again and the worst part is that they steal blatantly and even curse Indians for their inability to understand them while the very cultural degradation of the western society is a proof of their insecurities. This is a very general statement though and I mean no offence to anyone but i have defined my policy now of Zero Tolerance towards such people wherever they may be from.

This brings me to the bigger picture in Russia once again. In the last 100 years, Russia lost a major part of its male population to wars and industrial accidents and alcoholism, lost its culture to communism and lost its spirit to western capitalistic ideas and cultural onslaught. Now in 2016 there is a war waging all across the world and especially inside Russia with degenerative pop culture on one side and traditional family values on the other. Russians once again find themselves on the battle front, only this time it is economic and cultural.

I will share with you a very interesting fact which might be scandalous for many but I find it important to state it. Right now there are men from all around the world coming and studying in Russia so that at the end of it they could find a Russian woman to live with, I won't say that all of them want to marry here or not but there certainly is a big void that men all across the world know about. On the other hand the economic crisis has forced many people to take dire measures, especially for women, they are willing to marry anyone from any part of the world if that person could provide a stable life. There is nothing wrong with this situation except for the fact that many Russian women find themselves in an uncomfortable position because of this and sometimes taken advantage of.

In this kind of situation you throw in the mix of western pop culture and loose morality and infidelity and you create a deadly concoction that can poison any society. We all know how many Russian and Russian speaking women from former USSR countries find themselves in the Red Light areas of Bangkok and Dubai. This is unfortunate for those who had no other option. And this is why I feel that Putin is fighting a multi headed hydra on many fronts. He is fighting the battles in Syria and Ukraine and he is trying to protect his women and children from being abused. The only question that comes to my mind is why is it only Russia every time that has to pay a heavy price to save humanity time and time again.

Do we as Indians have no responsibility on the global scene. If the Russians love India so much, is it not our responsibility to fight for them as they fought for us many times in the last 70 years when we most needed it. Everyone knows about the Russian submarines that defended the Bay of Bengal against the American 7th fleet which could have turned the tides in the 71' war. Will Indians be forever remembered as a race that lost so much but never fought back and never fought for friends in need, just so we could uphold our peaceful image. These are the questions that are going to define my future actions.